The mention of Kali evokes a shadowy cloaked in mystery, for this Indian Goddess emerged from an ancient past. Although worshipped for centuries, most of the treasures of her mythology and practices are unknown. They were hidden in Sankrit text and esoteric sects. Hidden for a GOOD REASON!
Now a days in a part of the ‘spiritual community’ the power of Kali is confused by women with expressing anger, aggression and rage. These emotions have nothing to do with Kali. And can sometimes be mis-used as a way of ‘spiritually’ expressing your anger towards someone. 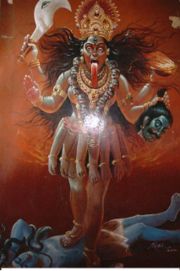 Kali shows us through destruction the path of liberation. Destroying all that is fake about you. Your belief systems, your conditionings, your attachments. All that is bound to space and time belongs to the realm of duality and therefor is not Real. If you get in touch with her knowledge, that means, the path inwards, then the work begins..
according to Sir John Woodroffe: “Kali is the deity in that aspect in which It withdraws all things wihich it had created into Itself. Kali is so called because She devours Kala (time) and then resumes Her own dark formlessness. “
Kali is perhaps the most difficult to understand Goddess. She is dark, destructive, terrible, unpredictable to our human perception. She is allied with the forces of death, an enigma, perhaps even a curse to those who cling on to the world of ‘form’.
Because Kali destroys attachment, she will START WITH YOURS. When Kali choses you to be her devotee, you will follow a path of destruction.
Kali’s expression of anger, rage and fury is WITHOUT attachment. It is a higher cosmic knowledge. It is like a tsunami washing over the land, it is a volcano that erupts, it is earthquake that shakes your foundation. Without the notion of ‘good, or bad’. She is a force of nature, she is nature. And surrendering to Ma Kali, is being stripped of all your un-reallness and she leaves you alone and stripped NAKED. No where to hide. SHE is not an excuse for acting out your trauma’s unto another person.
If you want to honor her name than PLEASE study her, for example through books: Harish Jorahi, David Frawley, Daniel Odier. Meditational practises, mantra, yantra etc. Find out that this force is NOT FOR ACTING OUT personal trauma but this force of destruction is for the benefit of all beings